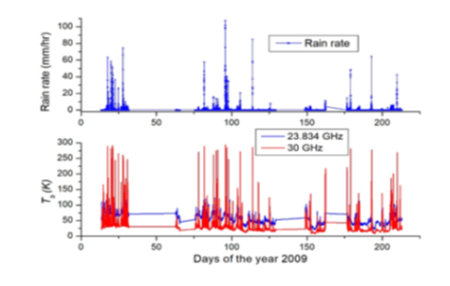 Determination of sky status by ground based radiometric data analysis

Objectives: To predict meteorological phenomena such as rain events from sky status during rainy and non-rainy periods. Methods: The method used here is based on brightness temperature ratio measurement at two different frequencies, namely 23.8 GHz and 30 GHz respectively, using ground based dual frequency radiometric data. The ratios of brightness temperature readings obtained by the dual-frequency radiometer at the two above mentioned frequencies are calculated for each simultaneously-taken pair of measurements. Data obtained by the authors for the year 2009 at Cachoeira Paulista in Brazil has been used for analysis. Findings: The major results obtained from the analysis of data collected over a continuous period of seven months are used to construct corresponding histograms and cumulative count graphs of brightness temperature ratios. The histograms and graphs clearly show three peak values that could be interpreted as thresholds between clear sky, cloudy sky and rainy sky conditions respectively. Novelty: The study implements detection of rain events from sky status during rainy and non-rainy periods using peak brightness temperature values obtained from graphs generated using the observation data. The outlined technique can therefore be used to clearly determine sky conditions and accurately predict rain phenomena. The ratio of brightness temperatures at the two frequencies is a unique parameter which is critical to the successful estimation of rain from sky status. The results agree well with multi-channel radiometric data obtained by other researchers at lower frequencies.

© 2021 Maiti et al. This is an open-access article distributed under the terms of the Creative Commons Attribution License, which permits unrestricted use, distribution, and reproduction in any medium, provided the original author and source are credited. Published By Indian Society for Education and Environment (iSee)

Objectives: Prostate cancer (CaP) is the second utmost diagnosed cancer among aged men all over the world. CaP contri...

Objectives: The main objective of this work is to provide a cost effective way to allow path planning for blind peopl...

Proposal and Verification of Function-based Security Protocol for V...

Not only M2M (Machine-to-Machine) communication but also IoT (Internet of Things)technology has emerged against the b... 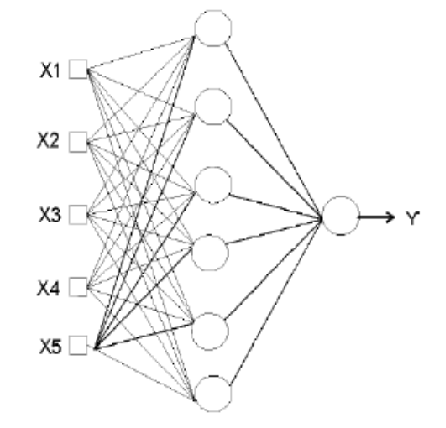 Objectives: To analyze the road traffic in Hyderabad at a selected junction and fit Hybrid model for forecasting the ...

The Effectiveness of Temporary Traffic Calming Devices on Reducing ...

Safety issue in school zones is one of the momentous problems in Thailand; in which mostly, the passing vehicles are ...

Objective: The objective of this paper is to propose a cloud system which ensures high security for storing and shari...

Urinary 1-Hydroxypyrene levels among children with asthma in Chenna...

Aim: To explore the potential relationship between exposure to Polycyclic Aromatic Hydrocarbons (PAHs) and asthma exa...

Objectives: Marine elevators require the mechanism of safety management due to the difficulty of their maintenance in...