Background / Objectives: In this paper, erosion wear response of slurry pipeline material is optimized by utilizing Taguchi’s experimental technique. Methods / Statistical Analysis: The investigation of erosion wear due to solid–liquid mixture flow took place with the assistance of a slurry erosion pot tester. The pipe material namely stainless steel SS-317L is utilized to lead the erosion tests. This erosion test is set up to impact the rotational speed, solid concentration and time with multi sized slurry. Fly ash was utilized as the erodent material. Findings: In these erosion tests, four experiments were performed. These four tests are performed at four different speeds 600, 850, 1100 & 1350 rpm and the concentration of solid-liquid mixture is 30%, 40%, 50 & 60% with time duration of these experiments are 60, 120, 180 and 240 min. Improvements / Applications: For protective coating, High-velocity oxygen-fuel (HVOF) spray process is used for depositing to coating powders Stellite-6 and WC - 12Co - 4Cr on the material namely stainless steel SS-317L. The S/N ratio of with and without HVOF coating of SS-317L varies from 44.88 to 29.77 (Uncoated), 64.43 to 37.09 (Stellite-6) and 80.00 to 49.25 (WC-12Co-4Cr) respectively. Rotational speed was resolved as one of the predominant factor which impacts the erosion wear response of SS-317L.

Sharma, et al., Optimization and Erosion Wear Response of Slurry Pipeline Material with and without Coating.  Indian Journal of Science and Technology. 2018; 11(28). 1-7.

Fuzzy Mathematical Approach to Analyze the Problems Faced By Turmer...

In this research paper, the authors attempt to find out the problems faced by the turmeric cultivators at the time of...

The impact of spirituality on work performance

This paper focuses on the impact of spiritual leadership and spirituality at work for performance improvement. Based ...

Among micronutrients, zinc is recognized as one of the main limiting factors of growth and yield of maize crop. To st...

Production of Various Chemicals from Nyamplung Oil with Catalytic C...

Objectives: To obtained data about chemicals that formed at Nyamplung oil cracking and also to study the effect of te...

Methodology of Exoskeleton with Actuation Methods and Discussion of...

Background/objectives: As the use of rehabilitation exoskeletons (techniques) has become an important means of treatm...

Objectives: This paper proposes a recommender system for travel planning build on the user personalized regard for bo...

Enhanced Biosynthesis of Laccase and Concomitant Degradation of 2, ...

Objective: Laccase enzyme has proven to be an excellent catalyst for the degradation of dioxin into less toxic metabo... 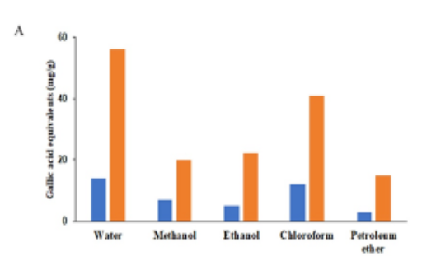 Objectives: To perform a detailed phytochemical analysis, antimicrobial and antioxidant activity of leaf extracts of ...