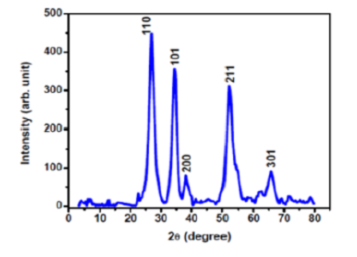 Objectives: To develop a unique wet chemical process for the rapid synthesis of SnO2 thin films and hence to study the structural, morphological, optical and electrical properties of the films. Methods/Analysis: Polycrystalline SnO2 thin films having a thickness in the range of 800-1000 nm with crystallite size less than 5 nm were synthesized within a time of 20 minutes and without the need of post-annealing using SILAR technique. Lattice parameters, c/a ratio, cell volume, dislocation density, refractive index, extinction coefficient and porosity of the SnO2 thin films were determined. Findings: Films have a coarse and porous surface morphology with very fine pores distributed nearly uniformly on the film surface. The crystallite size and strain developed in the SnO2 films were computed by the Williamson-Hall technique. Microstrain developed in the films is of the order of 10-3. SnO2 films exhibit nearly 70% transmittance in the visible region. The optical band gap of the SnO2 films is 3.65 eV. The refractive index of the films varies from 2.05 to 2.30 in the 450-1900 nm wavelength range. SnO2 films exhibit a resistivity in the order of 10-1 Ωcm. Novelty: Reports a unique rapid wet chemical process for the direct preparation of crystalline SnO2 thin films using monoethaolamine at a temperature of 800C. Literature survey reveals that no other method has yielded such type of good quality SnO2 thin films at this temperature and without post annealing or sintering. First time crystalline SnO2 films were prepared by a wet chemical process within 20 minutes.

© 2021 Murali & Remadevi. This is an open-access article distributed under the terms of the Creative Commons Attribution License, which permits unrestricted use, distribution, and reproduction in any medium, provided the original author and source are credited. Published By Indian Society for Education and Environment (iSee)

Background/Objectives: This research was conducted to investigate the relationship between leadership types of marine...

Examining the Antecedents of Social Media user Gratification among ...

Objective: This study aims to investigate the user gratification factors among the high school and under graduate stu...

Background/Objectives: To date, it has not found a traffic model that allows characterizing different kinds of servic...

Robust Face Recognition from Video based on Extensive Feature Set a...

Background/Objectives: This paper proposes a novel method of enhancing the face recognition process from video sequen...

Influence of Smart Devices on the Cognition and Interest of Underpr...

Objectives: In this study, we aim to verify the influence of smart devices on the cognition and interests in the smar...

A New Method of Data Preparation for Classifying Diabetes Dataset

Objective: Millions of people including children and pregnant women are affected by Diabetes mellitus. Undiagnosed di...

Background/Objectives: The common assumption made in basic heat exchanger design is that the fluid to be distributed ...

The Analysis on the Community Child Care Center Workers’ Level of...

Background/Objectives: Telemedicine can be considered IoT evolution of the telecommunications-oriented provision of h...

This study is aimed at assessing components of emotional intelligence among normal subjects and those with suicide tr...