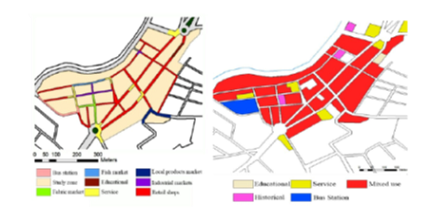 The applicability of a non-motorized transportation system in the downtown of Baniyas city, Syria

Objectives: This study aims to highlight the difficulties caused by the motorized transport system in the downtown of Baniyas city, Syria, and analyse the applicability of a non-motorized transport system based on a deep understanding of the nature of the society and the needs of the users. Methods: this study used the observation of the author and data obtained from official reports to identify the challenges in the downtown area caused by the current traffic system, a new non-motorized transport system was designed and proposed to the users through an online questionnaire using Qualtrics online survey tool. After the pilot sample testing the questionnaire was distributed to the targeted group of 326 participants with (11 invalid responses, 17 unqualified respondents and 298 valid responses). The data from their responses was exported to SPSS statistical analysis software then the qualitative data was analysed using SPSS and MS Excel. Findings: The most profound of the results is the significance of the relationship between the social reasons as a factor to prevent people from cycling and the variables of age and gender. The participants’ level of being affected by social reasons varied depending on their age and gender. And when giving people the opportunity to cycle in better conditions after implementing the proposal, it was also found that the participants were positive towards the idea of riding the bicycle regardless of their gender, but according to their age, people reacted differently, the younger people had a positive opinion, but the relatively older people were neutral towards it. Novelty: It is being the first study to target the downtown of Baniyas city, and designs an approach to improve it in addition to design the non-motorized transport system questionnaire which was an original work of this study.

© 2021 Haddad et al. This is an open-access article distributed under the terms of the Creative Commons Attribution License, which permits unrestricted use, distribution, and reproduction in any medium, provided the original author and source are credited. Published By Indian Society for Education and Environment (iSee)

We studied protein variation among the Egyptian species of wild Vicia that may be of taxonomical importance. Seeds of...

Background/Objectives: The main aim of this research paper is to evaluate the bidirectional mode division multiplexin...

Internal Communication and Technology – The Secrets of Success

Objectives: The purposefulness of the paper is to examine the relevance of internal communication and technology in t...

Mannich reaction is one of the most important fundamental reactions in organic chemistry. Substituted benzyl phenyl w...

Calculation of probabilistic worst-case response-time for message i...

The response time is one of the main constraints in bluetooth synchronization and message transfer. This paper provid...

Relationship Among the Attributes of World Countries and Their Cove...

Background/objectives: To examine the factors which can influence the presence of world countries in news tweets of i...

Framework of Data Deduplication: A Survey

To understand the concept and framework of de-duplication process along with application, various methods and technol...