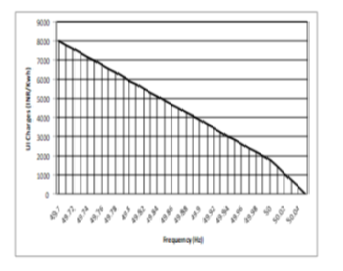 Objectives: To simulate automatic generation control (AGC) operation in a deregulated power system under availability based tariff (ABT) mechanism to regulate grid frequency during peak and off-peak hours. Method: For the simulation, the two areas, an isolated power system with Area1, which has thermal - hydropower plants with two DISCOs, and Area2 having a thermal – thermal power plant with two DISCOs have been considered. DISCO participation matrix (DPM) has been used for the visualization of bilateral contract by distribution companies (DISCOs) in the restructured environment. An AGC operation of two area power system with 10% load variations during peak hour and off-peak hour has been presented for the 24 hours in graphical form. Findings: The deviations in the grid frequency and Unscheduled Interchange (UI) charges or deviation settlement mechanism (DSM) rates of ABT due to sudden load changes and renewable power found. The frequent AGC operation of generators against load variation to stabilize the grid frequency is increasing wear and tear losses which finally increases maintenance cost and sometimes tripping of generators. Also, in peak hours and off-peak hours the drastic change in UI charges found during AGC operation so, there is a need to regulate grid frequency from the load side using distributed energy sources. Novelty: In proposed work, at the distribution side, Electric vehicle has been considered to regulate grid frequency during peak and off-peak hours. Work has been justified by appropriate data and simulated results.

© 2020 Prajapati et al.This is an open-access article distributed under the terms of the Creative Commons Attribution License, which permits unrestricted use, distribution, and reproduction in any medium, provided the original author and source are credited. Published By Indian Society for Education and Environment (iSee).

Objectives: A study is carried out to investigate the effect of marble sludge powder on the stabilization of soil and...

Design Features and Research of Electrothermal Microthrusters with ...

The paper studies the definition of design-basis appearance of Electrothermal Microthrusters (ETMT) with Autonomous H...

Harmonics are the major issues in Variable Frequency Drive systems. The objective of project is the analysis of harmo...

Attitudes of Male University Students towards a Physical Education ...

Objectives: To investigate the attitudes of King Fahd University of Petroleum and Minerals (KFUPM) students toward a ...

An Experimental Investigation of Statistical Model based Secure Ste...

Background/Objectives: Bioinformatic information in many diverse areas is being collected, managed, and stored in rel...

One of the most important protective devices in power systems are fuses which have been used for ages. Passing short ...

Objectives: Teacher’s evaluation in education system is quite important to improve the learning experience inin...

The Influence of Resource Competence on Convergence Performance thr...

With the increasing tendency of convergence products and services, most firms are interested in facilitating organiza...