Nanotechnology is employed in new and specific method for disease therapy. The shape and size of nano-particles are also important to serve the purposes. In this investigation, a comparison of inhibitory effects on Aspergillus niger and E. coli by nanosilver in 100, 200, 300, 400, and 500 ppm concentration was carried out. For this purpose, inseminated blank antibiogram disks were placed on bacterial culture over a nutrient agar environment of 0.5 Mac Farland`s standard. After an interval of first, second, and eighth days, the inhibitory zone was measured. In case of Aspergillus niger, PDA medium was used. The fungal growth was more sensitive to nanosilver than E.coli. Hence, nanosilver particles with 50, 100, and 150-ppm concentration were added to the culture medium for A.niger. After 6, 7, and 8 days, changes of growth, diameter and number of colonies were measured in treatment and control groups. In this investigation, nanosilver with 400-ppm concentration was more effective than the other concentrations for inhibiting E.coli. Effective time for induction of inhibitory effects on E.coli was 3-day post treatment with silver nano-particles. Effective dose of nanosilver concentration for growth inhibition of Aspergillus niger was 150ppm 8 day post treatment with silver nano-particles. Investigation of inhibitory effects for nanosilver concentration in Aspergilus niger and E. coli are examples of functional effects of new nano-biotechnlogy. These could be suggested in the therapy for human bacterial and fungal diseases.
Keywords: Nanosilver, nanobiotechnology, Aspergilus niger, E. coli.

Survey on Energy - Efficient Methodologies and Architectures of Net...

The emergingtechnology requiresa large number of core to be integrated into a single chip.This had led to the develop...

Investigate of the Effect of Width Defect on Eddy Current Testing S...

Objectives: Non-Destructive Evaluation (NDE) is the inspection of an object to determine its properties without destr...

FPGA Implementation of Novel Synchronization Methodology for a New ...

Presented in this paper, is an adaptive control scheme and a parameters update law based upon the Lyapunov stability ...

Objective: Objective of the case study titled “Customer Service- An Innovative Approach” is to illustrate... 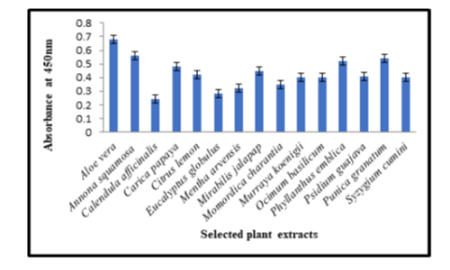 Background/Objectives: The main objective of the present study is to screen an efficient plant extract sources for th...

Estimation of Energy Spectrum and Energy Deposition of Photons Emit...

Objective: The objective of the current study was to estimate the energy spectrum and energy deposition of the photon...

Enhanced Biosynthesis of Laccase and Concomitant Degradation of 2, ...

Objective: Laccase enzyme has proven to be an excellent catalyst for the degradation of dioxin into less toxic metabo...

The Al/TiO2 core/shell nanoparticles can be used as coating materials in many industrial applications. In this articl...

Hydroxy Apatite (HA), as a bone mineral component, has been an attractive bioceramic for the reconstruction of hard t...