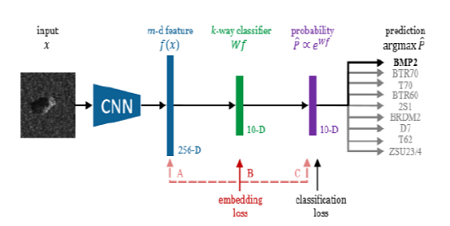 Objective: - To reduce training and testing time in SAR image detection and recognition using optimization algorithm. Methods: SAR images have achieved a prominent position in the arena of remote sensing and satellite technology. SAR image processing has many applications in different areas like agriculture, mineral exploration, resource management and environmental monitoring. To carry out this research works, MSTAR dataset was were used with six classes. The collected dataset was preprocessed with filtering algorithms to remove the speckle noise from the image. Then, image segmentation which is essential expertise for image processing has been done with aim of rationalizing and changing image representation into more meaningful and easier to analyze. The characters of Hue, Intensity, Saturation (H, I, S) were applied to acquire the information of the pixels of the target image. By doing so, color information and edge extraction were done, since it was the basic idea to achieve the segmented image from its background. Next, feature extraction has been done using DNNs through three stages (Low, middle and high level feature extraction). At low level feature extraction, the image edge and lines were extracted while image front or noses were extracted at middle level feature extraction. Then, all image features were combined at the high level feature extraction and thus all features were combined to form high-level features, because they were primitive images features. After doing all the above, detection has been done to locate the presence of objects in an image using bounding box regression model. Finally, for the SAR image recognition, the pre-trained CNN models such as ResNet-50, AlexNet, and VGG16 were used to compare their performance with the proposed model. In SAR image detection and recognition, the high training and testing time is founded as a challenging. Thus, to reduce such long training and testing time of SAR image detection and recognition, optimization algorithms such as Stochastic Gradient Descent with Momentum (SGDM), RMSProp and Adam optimization methods were used with the pre-training and proposed CNN model. Findings: Preprocessing was carried out using Median, Guided Filter (GF), Lee, Box, Adaptive or Wiener filter algorithms were used and their performances were also compared in PSNR, SNR and MSE values and from those all used algorithms, the GF achieves better performance in high PSNR value of 37.8342. The performance of the all three pre-trained models and the proposed models were compared in accuracy and speed. The AlexNet, ResNet-50, VGG16 and proposed models achieved accuracy of 89%, 92%, 86% and 95% respectively and proposed model achieved the best performance. Among the used four models with Optimization methods, the Proposed Model with SGDM took very least time for Training (26’ and 49s) and for Testing (17s). Novelty: New Deep Network Model was successfully designed, developed and used along with Optimization algorithms for reducing the training and testing time in SAR image detection and recognition.

© 2022 Selvam et al. This is an open-access article distributed under the terms of the Creative Commons Attribution License, which permits unrestricted use, distribution, and reproduction in any medium, provided the original author and source are credited.

Overview of industrial filtration technology and its applications

Filtration is a process where solid particles present in a suspension are separated from liquid or gas employing a po...

OFDM comes out as a key technology in contemporary wireless communication systems. OFDM offers a diverse kind of adva...

Objective: In this contemporary social networking era, it is no bewilderment that, information security breach is at ...

Effect of the Time-Varying Soil Resistivity on the Performance of t...

Background/Objectives: Transients in the overhead power lines due to lightning events can be caused by both direct an...

A Comparison of the Poverty and the Consumption Between Poor and No...

Background/Objectives: Our study examines poverty ratios, characteristics of expenditure trends, determinants of both...

The Relationship between the Resilience, Prenatal Stress, and Confi...

Objectives: This study attempts to provide the base materials for developing the program managing stress of pregnant ...

Impact of Age and Income over Green Consumer Behavior

Past 12 years rank among the warmest years in surface temperature since 1850. The Carbon dioxide concentration is inc...

In present paper, the performance of the marine propeller under non-cavitating condition is evaluated numerically usi...

Background/Objectives: This paper suggests a new approach against Distributed Denial of Service attacks and traffic e...

Aeromycological profile of the public parks of Bhilai Township, Chh...

A systematic aeromycological survey of four public parks of Bhilai Township in terms of sporal diversity and number w...