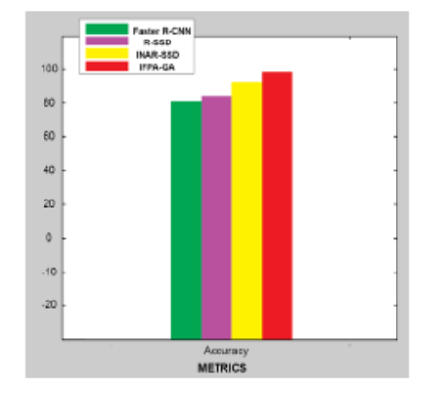 Objectives: To propose a new model for early detection and classification of apple leaf diseases by means of genetic algorithms and advanced deep learning methods in order to minimize plant degradation and maximize detection accuracy. Methods: A feature selection and extraction task is carried out by using an Improvised Flower Pollination Technique (IFPA) based genetic algorithm. Deep learning techniques such as Multi Class Support Vector Machine (MC-SVM) and Spectral Vegetation Indices (SVI) are used to classify and detect disease. The Region Growing Algorithm (RGA) and the Stochastic Gradient Descent Method (SGDM) are used to detect leaf colour segments and identify the disease at an early stage based on shape, texture, and colour features. IFPA-GA with MC-SVM and SVI extracts the features from the apple leaf dataset (collected from the Apple Experiment Station of Northwest A&F University, China) and then selects the appropriate function to perform classification and detection of disease at early occurrence and to improve the accuracy level. To demonstrate the efficiency of the proposed algorithm, MATLAB is used for implementation. The performance results are evaluated and compared to the existing models such as Faster R-CNN, R-SSD, and INARSSD. Findings: Early disease detection and classification of leaf diseases are achieved with 94.09% accuracy level, 93.07% Speed, 94.01% sensitivity, 93.38% specificity, 95.01% precision, 93.17% recall, 190 True Positive, 110 True Negative, and 92.07% F-Score to detect the disease and classify it in an optimized manner, which is high compared to the existing versions. Novelty: According to the findings of the comprehensive study, the proposed detection and classification method IFPA-GA with SVM-SVI outperforms Faster R-CNN, R-SSD, and INAR-SSD in terms of accuracy and speed of apple leaf disease detection at an early occurrence by classifying it in a robust manner.

© 2022 Jose V & Santhi. This is an open-access article distributed under the terms of the Creative Commons Attribution License, which permits unrestricted use, distribution, and reproduction in any medium, provided the original author and source are credited.

Objectives: This paper tries to study and understand the potential opportunities and challenges faced by green entrep...

The Impact of Elnino on Soft and Hard Commodities, Reference to Com...

ElNino is the irregular climate conditions which created by the warming of the pacific sea close to the equator, off ...

Background/Objectives: Permutation flow shop scheduling deals with finding a sequence and makespan for the jobs, the ...

Comparative Study of UWB Communications over Fiber using Direct and...

Implementation of Cloud based Electronic Health Record (EHR) for In...

Background/Objectives: EHR means the digital version of the patients medical report, in store the data in real time, ...

Objective: The main aim of the project is to control the home and the industrial equipment from a distant place by us...

Background /Objectives: To investigate the effective method of reducing risk in consumer’s point of view. To ex...

Objectives: The objective of this paper is to study the influence of interface between multi layered composite struct...