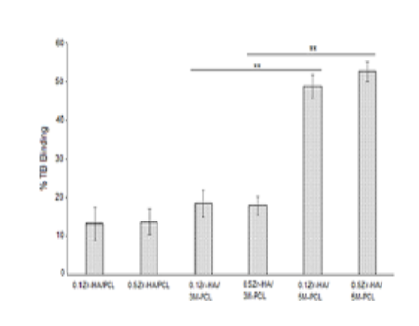 Objectives: To develop alkaline-treated polycaprolactone (PCL) and Zrhydroxyapatite (Zr-HA) and fabricate their mixtures as drug delivery systems for dental application. Methods: PCL was subjected to hydrolysis by using concentrated NaOH. Zr-HA was synthesized by co-precipitation reaction that contained Ca(NO3)2, (NH4)2HPO4 and ZrO2 at 65OC. The obtained materials were characterized by using techniques such as X-Ray Fluorescence, Fourier Transform Infrared Spectroscopy, X-Ray Diffraction, or rheometric analysis. Various compositions of the Zr-HA and the modified-PCL were used for preparing drug delivery systems, and properties including cytotoxicity, degradation, and toluidine blue (TB) binding/releasing were investigated. Findings: The synthesized Zr-HA was more non-stoichiometric than HAcontrol. Improved hydrophilicity was evident for the modified-PCL. Drug carriers composing of the Zr-HA and the modified-PCL were increasingly degradable in phosphate buffer saline solution compared to those containing HA/PCL-control, resulting in 9% and 6% weight loss after 8 weeks of the immersion, respectively. Binding of TB on the Zr-HA/the modified-PCL mixture increased while the release of such bound dye decreased in comparison with that of HA/PCL counterpart. All of the developed materials were non-cytotoxic based on MTT assay using L929 cell line. Novelty: Partial inclusion of Zr4+ ions in Ca2+ lattices of HA resulted in fairly degradable Zr-HA. Shortening the epsiloncaprolactone units of PCL by strong bases was simple in producing fragmented PCL polymer that exhibited improvement of hydrophilic interaction towards another. Varying the weight ratios of the Zr-HA and the modified-PCL when to prepare drug carriers is possible to acquire optimal binding/releasing profiles of drugs in dental cavities.

© 2022 Thepsri & Kaewsrichan. This is an open-access article distributed under the terms of the Creative Commons Attribution License, which permits unrestricted use, distribution, and reproduction in any medium, provided the original author and source are credited.

A Study on Impact of HRM Practices and Policies on Employee's Organ...

The Indian textile sector plays key role through its support to industrial output and export earnings to the country....

Analysis of the Layers in Convolutional Neural Network in the Conte...

Objectives: To analyze the layers in Convolutional Neural Network in the context of text recognition looking for inte...

Study on the Interfacial Transition Zones of Recycled Aggregate Con...

Background/Objectives: The objective of the present paper is to study the effect of admixtures and the mixing approac...

A Comprehensive Study on Cluster Based Routing Protocols for Wirele...

Objectives: Numerous individuals among us lose their life to heart assault. Currently in India, the heart attack deat...

Objective: The speckle noise reduction is an important preprocessing step, normally performed to improve the segmenta...

Clinical decision support system for chest X-ray images was proposed in this paper, which is based on image processin...

Groundwater use is increasing all over India and Chennai is not an exception. A good possibility exists to recharge a...

A comparative analysis of hydrologic responses to rainwater harvest...

This paper attempts to investigate the implementation of rainwater harvesting (RWH) structures and its hydrologic res...