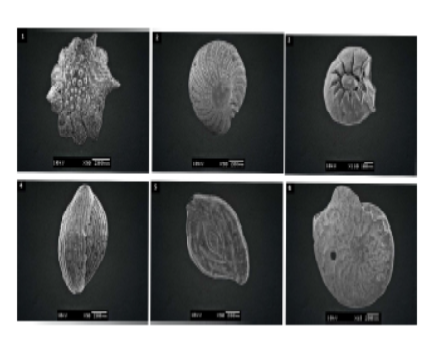 Objectives: The present investigation attempts to map the foraminiferal distribution pattern, its ecological significance, and the elemental composition of the Koswari and Van islands. Methods: Foraminiferal distribution patterns (both planktic and benthic) were recorded, and textural and geochemical analyses were carried out in the present study. Findings: The coastal environments are generally highly dynamic regions of the earth that possess imprints of global climatic variations. The islands of the Gulf of Mannar emerged during the last interglacial period. These islands are getting eroded due to the long-term impact of coral mining and climatic changes. The excess removal of corals from Koswari Island adversely affected the live coral cover of the Island. The Van island is in proximity to the Tuticorin coastal city and one-fourth of the Island has already become submerged due to several natural and anthropogenic factors. Both the islands are affected by the world coral bleaching event witnessed from 2014-2017. This study is an attempt to record how the foraminiferal assemblages of Koswari and Van islands responded to the world coral bleaching event. In the present investigation, we identified fifteen benthic foraminiferal species and two planktic foraminiferal species from both islands. The foraminiferal assemblages mark the abundance of Neorotalia calcar, Quinqueloculina seminulum, Elphidium crispum, Amphistegina lessonii, and Rotalidium annectens. The main ecological parameters which govern the foraminiferal distribution in these islands are coral reef flats, carbonate environments, and shallow coastal waters. Neorotalia calcar and Quinqueloculina seminulum are recorded as the most abundant species of both Koswari and Van islands. N. calcar prefers macroalgal mat as substratum,while the frequent occurrence of deformed tests and stress-tolerant species such as Q. seminulum indicate the influence of pollution in the coastal area. These recorded species are considered characteristic reef benthic foraminifers which prefer coarse sandy substratum. The other abundant species are Elphidium crispum, Amphistegina lessonii, and Rotalidium annectens, which are widely distributed in the inner shelf sediments of Tamil Nadu and Kerala coasts. Textural attributes of the Koswari and Van islands reflect its high energy environment, and the geochemical signature shows the high calcareous content with typical coral reef foraminifera associated with such sediment nature. Novelty: The study tried to map the effect of the global coral bleaching event of 2016 on Koswari and Van islands of the Tuticorin group of Islands in the Gulf of Mannar using foraminifera as a proxy.

© 2022 Dev et al. This is an open-access article distributed under the terms of the Creative Commons Attribution License, which permits unrestricted use, distribution, and reproduction in any medium, provided the original author and source are credited.

A New Method of Imputation for the Missing Value in the IN/OUT Pro...

Objective: The main objective of study is to propose a new method of imputation for missing data. The study discuss m...

Objectives: The autonomous vehicle and driverless research is an interesting issue. Even companies like Google are pa...

Optimal Placement of DG Based On Voltage Stability Index and Voltag...

Objectives: In Modern world power production and its efficient usage defines the development of the country. In distr...

A Novel Implementation of Image Segmentation for Extracting Abnorma...

Background/Objectives: The main intent of this paper is to detect tumor in the mind by means of image segmentation. M...

The Safety Management Activity of Nurses which Nursing Students Per...

This study was aimed to examine the safety management activity of nurses which nursing students perceived during clin...

Objectives: Mobile ad hoc networks (MANETs) is a suitable environment for unknown or unspecified communications. It i...

Objectives: The recent development in materials replaces automotive and aerospace components with composites. Among c...

In Situ Nick End Labeling as a Molecular Immunopathological Indicat...

Background and Objective: The aim is to determine the correlation between gastric Apoptotic Index (AI), inflammatory ...

RFID generally encompasses any wireless (or partially wireless) communication that allows for remote retrieval of inf...