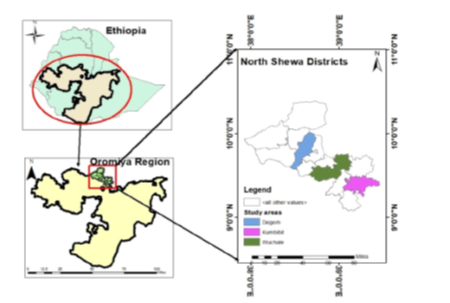 Objectives: To analyze the impact of a single and/or bundle of technologies on the productivity and welfare of farmers, and to check its heterogeneous impact on productivity and farmers’ welfare. Methods: A Multinomial Endogenous Switching Regression (MESR) was employed to analyze the data collected from a total of 400 cereal crops producing farmers in the north Shewa zone of Ethiopia. Findings: The analysis showed that compared to the non-adopter farmers, a better net cereals crop income per land was obtained from the simultaneous adoption of improved seed and row planting, row planting and urea, and improved seed, and row planting and urea. For instance, compared to the counterfactual scenario of non-adopter, the mixed adoption of an improved seed variety with row planting technology increases net cereal crop income of farmers by about birr 14479.64 per cultivated land. The result also confirmed that a slight increase in welfare was recorded when cerealproducing farmers adopt improved agricultural technologies compared to a counterfactual scenario of non-adopters. The consumption expenditure per adult equivalent for raw planting technology adopters increases by Birr 567.69 compared to the counterfactual scenario of non-adopters. Novelty: The study provides empirical evidence about the possible role of using different adoption technology packages jointly on productivity and welfare. Sustainable and simultaneous adaptations of improved agricultural technologies need to be promoted for better farm productivity and welfare of households.

© 2021 Addis & Sani. This is an open-access article distributed under the terms of the Creative Commons Attribution License, which permits unrestricted use, distribution, and reproduction in any medium, provided the original author and source are credited.

Objectives: To investigate heat transfer characteristics of nocturnal cooling system in the Indian climate with suita...

Effects of a Functional Routine Enabling Program on Behavioral and ...

Objectives: This study applied to a client-oriented FRE program to dementia patients in a community to analyze the ef...

Background/Objectives: With the increase of portable devices as well as progress in wireless communication, Mobile Ad...

A Study on Performance of Self Compacting Concrete with Mineral Adm...

Self-Compacting Concrete is an innovative concrete that does not require vibration for placing and compaction. It is ...

Objectives: Program Slicing is proved in breaking down the large program into the small relevant parts that is needed...

A Systematic Survey of Vanet Routing Protocols based on Transmissio...

Vanet is a super class of Manet with some unique features High speed vehicles moving on roads exchange information am...

Development of Integrated Operation and Management System for ICT-B...

Objectives: This study designs the growth analysis system of plant factory. Methods/Statistical Analysis: Based on co...