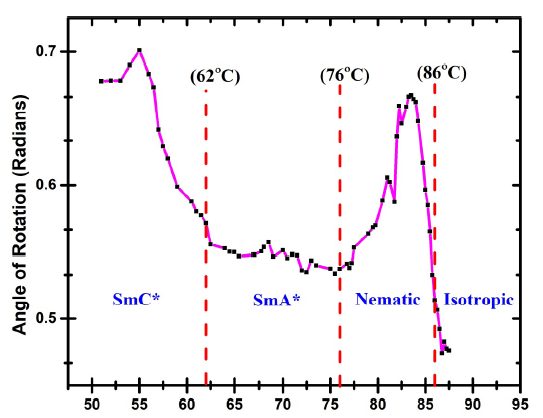 Objectives: The Phase transition scheme of Ferroelectric Liquid Crystal (FLC) sample has been studied in a temperature range 500C to 950C. Methods: The material was procured from Merck, Germany and was used as such without any further purification, and studied for the measurement of optical rotation and transmittance. The Polarizing Optical Microscopy (POM) technique has been used and the different phases existing in the sample were observed by placing the sample having planar alignment under crossed polarizer arrangement. Findings: The sharp variation in the values of optical rotation and transmittance at the phase transition points clearly indicates that the different phases exist in the experimental sample. From the LDR vs Temperature and Optical Rotation vs Temperature study, four different phases for the sample were obtained. The SmC* phase exists in the temperature range 300C – 620C and at 620C, the SmA* occurs. The sample shows SmA* phase in the temperature range 620C – 760C and at 760C sample transit to Nematic phase which occurs in the temperature range 760C – 860C and lastly, Isotropic phase appears at 860C. Novelty: Some researchers have studied the same sample but in the temperature range 300C to 620C where they were able to observe only two initial phases namely SmC* and SmA* whereas the present study reports the four different phases (SmC*, SmA*, nematic and isotropic) of the Ferroelectric Liquid Crystal (FLC). The same study can also be carried out using the other technique like Differential Scanning Calorimetry (DSC) but the technique used in the present study is simpler and cost-effective. The same technique can also be applied to other liquid crystal samples to study their phase transition behaviour.

© 2022 Warsi & Manohar. This is an open-access article distributed under the terms of the Creative Commons Attribution License, which permits unrestricted use, distribution, and reproduction in any medium, provided the original author and source are credited.

Objectives: Long Term Evolution(LTE) can be defined as a 4G wireless broadband technology developed by the 3GPP. It b...

An Efficient Clustering Algorithm for Predicting Diseases from Hemo...

Modeling the spatial variogram of tuberculosis for Chennai ward in ...

In this paper, we have used statistical measures and spatial deviational ellipse to determine the spatial pattern of ...

Objectives: A framework for character recognition is essential used to convert a digital image of character into mach...

Analysis of Various Intrusion Detection Systems with a Model for Im...