Objectives: The development in railway sector resulted in an increase in railway traffic. Due to absence of technology the number of accidents in railway has increased. This article discuss on how to prevent these accidents. Method/Statistical Analysis: In this paper, the proposed system uses Android supported embedded systems which aim at alerting the drivers/ Railway loco pilot to prevent the collisions. The proposed system would overcome the existing wireless sensors based AntiCollision Device (ACD). Findings: The proposed system makes use of the Android device for visual display, Wireless sensors and Microcontrollers. It also uses the GPS system for location tracking and GSM technology for wireless transmission. The proposed system aims at maintaining a safe distance of 1Km between the trains, and object collision avoidance. On detection of a fault/upcoming collision the device will alert the drivers/Railway loco pilots and shows a visual display on the Android device about the upcoming fault and the distance between them. Applications/Improvement: This system also aims at prevention of other train accidents such as fire accidents, object collision, etc. This system provides speed controllers, alerts on signal over jumping.

Effectiveness of using WhatsApp to Manage Talents in Creating Stude...

Objectives: The research is about exploring the possibilities of achieving non academic dreams of students by utilisi...

Objective: In a grid-interactive (PV-SOFC) generation system, the inverter is the main constituent. Further, the qual... 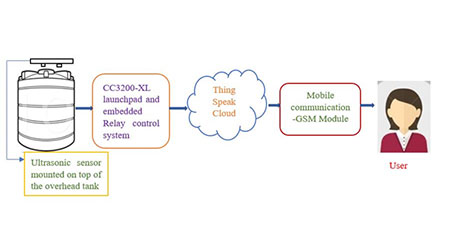 Objective: To monitor and control the water level in real time using IoT and cloud computing technologies to avo...

The influence of a bearing bush mass in sliding bearings with a flo...

From the point of generation of oscillation, a turbocharger is a self-general system. The essential source of oscilla...

Objectives: Every year millions of babies born preterm and it is a serious issue in developed countries. Preterm birt...

Performance and emissions characteristics of a diesel engine with v...

This paper presents the suitability of Pongamia methyl ester oil as a source of renewable fuel substituting petrodies...

Objectives: To propose a generic framework that would help in defining a process and an eco-system which could be use...