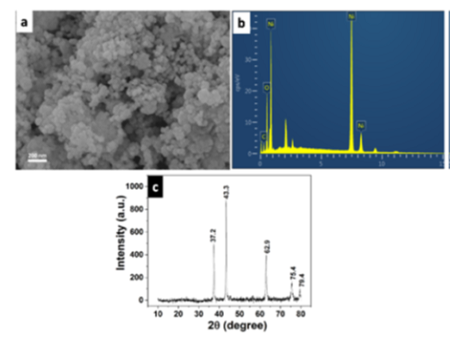 Objectives: To study the simultaneous removal of metal ions to understand the dynamics of the adsorption process for the assessment of the actual potential of an adsorbent in real-life applications. Methods: A one-step hydrothermal method was employed for the synthesis of nanomaterial. The hydrothermal treatment was performed at 110o C for 3 hours and calcined at 300o C for 2 hr to complete the nickel oxide nanoparticle synthesis. A systematic study of metal ion adsorption onto the nickel oxide nanoparticle was conducted to evaluate the maximum adsorption capacity and to understand the adsorption behaviour of the metal ions in presence of the others. The estimation of metal ion adsorption was done by measuring the residual concentrations using an atomic absorption spectrophotometer. Findings: The microscopic and spectroscopic characterizations confirmed the formation of nickel oxide nanostructures. The experimental results suggested that the adsorption process follows the Langmuir isotherm and the pseudo-secondorder model for metal ion adsorption in single and mixed solutions. A synergistic effect was observed for Pb (II) adsorption and an antagonistic effect for Cd (II) adsorption. The maximum adsorption capacity of ~650 mg/g of Pb (II) and ~475 mg/g of Cd (II) were noticed for simultaneous adsorption by the NiO nanoparticle. Novelty/improvement: The presence of more than one heavy metal ion in the wastewater is obvious, and one kind of metal ion may interface with the adsorption behaviour of the others. Further, limited studies on simultaneous adsorption of metal ions using metal-oxide nanoparticles are available in the literature. Hence, this work will provide an idea about the applicability of the NiO nanoparticle for real-life applications.

© 2021 Sardar. This is an open-access article distributed under the terms of the Creative Commons Attribution License, which permits unrestricted use, distribution, and reproduction in any medium, provided the original author and source are credited. Published By Indian Society for Education and Environment (iSee)

Total Productive Maintenance in a Manufacturing Industry: A Case St...

Objective: To design and implement an algorithm for load balancing with convenient utilization of heterogeneous grid ...

Objectives: To investigate the post-tensioning behavior of the soil-cement interlocking bricks used in masonry wall s...

Development and Evaluation of Schematic Simulation Board for Automo...

Objectives: In this study is to evaluate the possibility of introducing innovation to the existing Electronic Fuel In...

A Comparative Study of Maintainability versus Availability Index of...

Background/Objectives: The OSS is generally unique in relation to the proprietary programming. In the OSS improvement...

Glucagon-like peptide 1 (GLP-1) is an incretin hormone which is released from gut. It stimulates insulin secretion, s...

Erythropoietin may modify tyrosine kinase activity for its neuropro...

Noise removal from a non-stationary signal like Electrocardiogram (ECG) signal is a major problem. Moreover, nullifyi...