Background/Objectives: The terrorism threat caused by terrorist who posses forged passport and identities due to insecure environment which could be more serious imminent. Traditional scheme and techniques available to protect the information from unauthorized user is not enough for the current environment. Methods/Statistical Analysis: So, a hybrid multilevel DNA computing based Color Code Cryptographic scheme combined with Elliptic Curve Cryptography is proposed to protect the passport data from the eavesdropper. Proposed data encryption algorithm consists of two level of security, first level of security is provided by convert the personal details (Plain Text) of the customer into Unicode and RGB color code and then map the color code with DNA nucleotide. The mapped DNA molecules converted into ASCII values for encryption process. DNA molecules help to store enormous amount of data intended to allow more number of user to access the system. Second level of security is provided by encrypt the ASCII values using Elliptic Curve Cryptography techniques which require very less key size compared with traditional schemes. Resultant Cipher Text is hidden in the personal image of the customer using LSB steganographic method. Findings: Compared with traditional scheme, proposed scheme provides multilevel of security with less communication and computational overhead due to its lesser key size. ECC-80 bit key size based encryption scheme provides same level of security as RSA-1024 scheme with less number of operations involved in the passport verification system. Applications/Improvements: Since the proposed scheme require very less key size, consumes very less power, it will be more suitable for power constrained devices such as smart card, sensors, mobile phones, PDA’s, RFID tags, etc.,

Location-Based Services (LBSs) have long been studied by many researchers and they nowadays provide very useful infor... 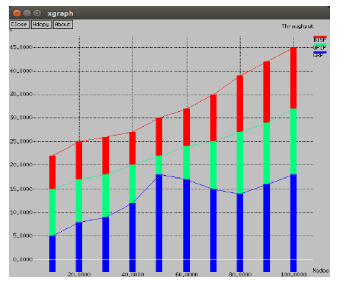 Background: Enhancing security and minimizing the delay is a significant task present in all modern networks. Dynamic...

Objectives: Even when studies report most of the Contact Lens (CLs) wearers possess improved vision, there are some p...

FPGA and ASIC Implementation of Systolic Arrays for the Design of O...

Background/Objectives: A new systolic algorithm for median filtering is analyzed in this paper, this algorithm is sui...

A Study on Heat Radiation Performance According to Changes in Filli...

The present paper is a study for evaluation of heat radiation performance according to changes in the capacity of flu...

Objectives: Developmental programming must work. Following quite a while of vital investigation into open private key...

Effect of the electrode to work angle, filler diameter and shieldin...

GMAW (Gas Metal Arc Welding) is an arc welding process which is widely used in industry to join the metals. We invest...

Objectives: The present research aims at enhancing the performance of the self-excited wind-driven cheap cage inducti...