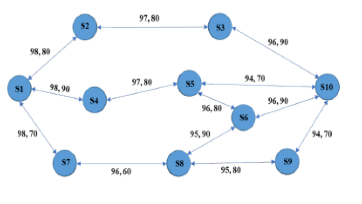 Objectives: An energy-efficient optimum path selection to reduce the number of packet retransmissions in a path is proposed in this paper using a new metric New-Expected Transmission Count (N-ETX), Residual Energy (RE), and Path Objective Function (POF). Methods: Energy efficiency, packet retransmission, and RE is considered while making the best choice of the optimum path. The refined N-ETX metric is employed to measure the Packet Delivery Ratio (PDR) of a node. If the PDR ratio is higher, this node is included in the optimum path set. The proposed algorithm avoids the inclusion of critical nodes such as dead nodes if the RE of the nodes is lower than the predefined Energy Threshold (ETHR). The Unicast message reply to strategy significantly decreases the quantity of control message overhead. The T-test’s Degree of Variance and Degree of Independence is used to discover the energy-efficient optimum path. It is demonstrated through performance outcomes that the obtained Quality of Service (QoS) parameters for the proposed algorithm stands superior to the state-of-art protocols. Findings: An algorithm established on N-ETX and RE metrics is proposed, and the discussions have shown that this approach is energy efficient. This metric decreases the quantity of packet retransmission effectively for a path. As an outcome, the sensor’s higher energy consumption is reduced. The proposed algorithm outperforms the current algorithm by decreasing energy consumption, reducing the quantity of packet retransmission, improving the PDR ratio, and enhancing the network life expectancy. The simulation outcome established that energy consumed is decreased by 19.07%, RE of the nodes is increased by 10.51%, PDR ratio is increased to 98%, and network lifespan is increased by 30.54%. Novelty: Internet of Things (IoT) gadgets are bound by hardware limits regarding computation, memory, and energy proficiency. To effectively transmit data packets, every IoT device must have a routing communications protocol that is easy to create. IoT devices necessitate the demand for self-adaptive routing algorithms. During network operation, packet energy dissipation during the broadcast and reception process is significantly higher when assessed to otherenergy-consuming processes like sensing, data processing, etc.

© 2022 Newton & Felix. This is an open-access article distributed under the terms of the Creative Commons Attribution License, which permits unrestricted use, distribution, and reproduction in any medium, provided the original author and source are credited.

An Experimental Study on E-Waste Concrete

Objective: This project deals with the experimental study on E-waste concrete. Methods/Statistical Analysis: An exper...

A voice recognition system is designed to identify an administrator voice. By using MATLAB software for coding the vo...

A Comparison of Multiple Imputation Methods for Data with Missing V...

Missing data is relatively common in all type of research, which can reduce the statistical power and have biased res...

Study on Characterization of River Sand as Heat Storage Medium

The article focuses towards the study and characterization of the river sand suitability for high temperature thermal...

Design and Development of Microstrip Patch Antenna at 2.4 GHz for W...

Due to the existence of growth in development of low cost, less weight, highly reliable, minimal profile antennas for...

Some Results about Duality of Generalized Bessel Sequences

Bessel sequences in Hilbert spaces have been studied intensively for the past years. In this paper we show that in an...