Objectives: To do the mechanical characterization of the composite developed by reinforcing the Grey Cast Iron (GCI) in AA6061. Methods/Statistical Analysis: An aging study was carried out on specimens of plain AA6061 matrix alloy and GCI reinforced AA6061 composite. Initially, samples were solution treated for 2 h at 5500 C, then quenching in water followed by artificial aging at 1600 C for different aging times. In the present study microstructure, hardness, tensile and impact properties of AA6061 based composite reinforced with GCI are analyzed as cast and in peak aged conditions. Findings: The presence of Grey Cast Iron in the matrix has resulted in improvement of the mechanical properties of the composite. The micrographs of the composite revealed a uniform distribution of the particles in the matrix. Comparison of the characteristics before and after heat treatment was done and it was found that there is an improvement in hardness, tensile strength of the composites as well as AA6061 alloy after heat treatment. It is found that the impact resistance reduces as the quantity of reinforcement is increased and also the cast specimens had better impact resistance than the peak aged category. Lowering of impact resistance is due to the loss of matrix ductility. Application/Improvements: The GCI reinforced particulate composites have been proved to be most suitable for heat and wear resistance applications.
Keywords: Characterization, Grey Cast Iron, Heat Treatment, Metal Matrix Composites, Particulates, Stir Casting

Objectives: Image Binarization is the method which converts coloured and grayscale images into black and white images...

Utilizing the Amenities of Unstructured Peer to Peer Framework in E...

Objectives: In this paper, a novel algorithm based on Transform Domain Least Mean Square (TDLMS) is proposed for Blin...

Effect of nematic liquid crystals on optical properties of solvent ...

In the present article the effect of two different types of nematic liquid crystals on electro-optical and thermo-opt...

Background/Objectives: Fuzzy Logic is derived from Fuzzy Set that deals with reasoning that is accurate rather than p...

Objectives: The vital goals of the face recognition research was for the use of optimization algorithms in an efficie...

Food recipes, from traditional recipes to fusion recipes, are easily uploaded and shared online. Recipes consist of a... 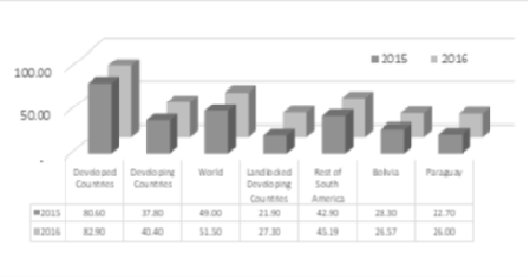 The landlocked condition as determinant for development of internet...

Objectives:To validate if the condition of Bolivia as a landlocked country is the main reason for the low Internet pe...