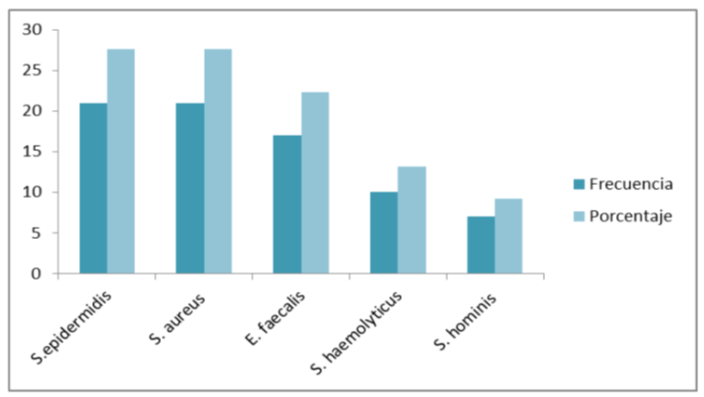 Resistance profiles of bacterial pathogens isolated in a hospital institution in Montería - Córdoba, 2018

Objective: To determine the resistance profiles of bacterial pathogens isolated in a hospital institution in Montería – Córdoba. Methodology: An observational study was carried out, during the months of January to December 2018; 344 samples were evaluated. Mention about the source of study samples. The identification and susceptibility of the bacteria were determined through the VITEK system. Findings: Among the Gram-negative bacteria identified were Klebsiella pneumoniae, Pseudomonas aeruginosa, Escherichia coli, Acinetobacter baumannii and Serratia marcescens, while Gram-positives were the Staphylococcus epidermidis, S. aureus, S. haemolyticus and Enterococcus faecalis. Gram-negative isolates such as Klebsiella pneumoniae showed resistance to piperacilinatazobactam, ceftazidima, cefepima, doripenem, imipenem, meropenem, amikacina and ciprofloxacina, being sensitive to gentamicin. P. aeruginosa,E. coli and A. baumannii showed resistance to all antimicrobials, with the exception of colistin. S. marcescens only showed resistance to ceftazidime. Enterobacter cloacae showed resistance to most drugs, with the exception of amikacin and gentamicin. Among the Gram-positive isolates, S. epidermidis showed resistance to Trimethoprim / Sulfamethoxazole, erythromycin, nitrofurantoin, ciprofloxacin, and levofloxacin. S. aureus and Staphylococcus haemolyticus showed susceptibility to all antimicrobials, while E. faecalis and Staphylococcus hominis only showed resistance to erythromycin. Conclusion: A wide prevalence of antimicrobial resistance (mention the milieu) was observed in this investigation.

© 2020 González et al.This is an open access article distributed under the terms of the Creative Commons Attribution License, which permits unrestricted use, distribution, and reproduction in any medium, provided the original author and source are credited. Published By Indian Society for Education and Environment (iSee)

Differences in Customer Satisfaction and Repurchase Intention for O...

Objectives: This research aims to analyze and compare the differences in the satisfaction that South Korean consumers...

Lower Permian deposits in the Kalmard block, which are known as Khan Formation, enjoys different characteristics in v...

Objectives: From the existing literature review we found that the link quality between nodes and to prolong the batte...

In an agricultural field, farmers have a wide range of diversity to select suitable fruit and vegetable crops. Howeve...

Energy Efficient and Reliable WSN based on Improved Leach-R Cluster...

Background/Objectives: Routing in Wireless Sensor Network (WSN) is an important area of research due to its rapidly i...

Objectives: SQL Injection Attack (SQLIA) is a frequent and a severe security issue in the web applications. In SQLIA,...

Background/Objectives: Soil is an essential key factor of agriculture. The objective of the work is to predict soil t...