Vegetable oil was being used as fuel in earlier days when the petroleum fuel supply was quite expensive and/or difficult to obtain. Later, with the ease of availability and supply of petroleum products, vegetable oil was replaced with the diesel which reduced the dependence on vegetable oil and the entire research efforts were directed towards improving the performance of CI engine using diesel fuel and the research efforts directed towards improving the performance of CI engines using vegetable oil as fuel for CI engines were reduced to very large extent. The present work describes the simulated result of the performance of a four stroke, single cylinder, air-cooled, direct-injection compression ignition engine powered by neat jatropha oil. The preheating of the neat jatropha oil is done from 30o C to 100o C. The performance of the engine was studied for a speed range between 1500 to 4000 rpm, with the engine set at full throttle opening and hence the engine was operated under full load conditions. The parameters considered for comparing the performance of neat jatropha oil with that of diesel fuel operation, were brake specific fuel consumption, thermal efficiency, brake power, NOX emission of the engine. The software established that i) the engine offers lower thermal efficiency when it is powered by preheated neat jatropha oil at higher speed ii) the power developed and Nox emission increase with the increase in the fuel inlet temperature iii) and the specific fuel consumption is higher than diesel fuel operation at all elevated fuel inlet temperature.
Keywords: Alternative fuel, biofuel, neat jatropha oil, diesel engine, Diesel-RK software

Standardization of Education Levels in Russia: Problems of Continui...

Background/Objectives: The article studies the professional readiness of educational staff to implement the Federal S...

Molecular Docking Study of Biologically Active Ligand and the Insig...

Background/objective: The aim of the study is to synthesize derivatives of colchicine, which is an anti-gout drug, an...

Utilization of Waste as a Constituent Ingredient for Enhancing Ther...

Objective: In view of the environmental regulations, practitioners have been inclined to use bricks with higher insul... 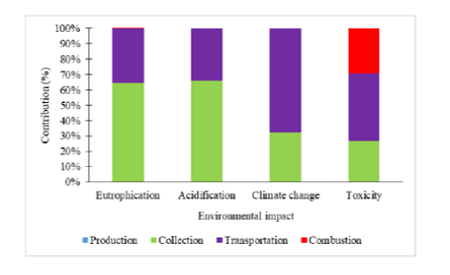 Objectives: This study assesses the environmental performance of cocoa pod husk as a fuel for a biomass power plant i...

Inventory Reduction in the Supply Chain of Finished Products for Mu...

Objectives: This article aims to propose strategies to reduce inventories in the chain supplies multinational compani...

The Factors Driving Testing in DevOps Setting- A Systematic Literat...

Objectives: Software testing is no more “Essential” requirement but it is “Critical” for the ...

Prediction of Universal Joint Behavior Under Small Axial Loading Us...

Background/Objectives: Tremendous growth in the mobile communication services in this technology driven era has made ...