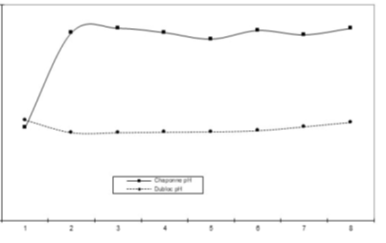 Objectives: The present research was carried out in order to know soil cadmium (Cd) availability. Method: The researchers present results of analyzing soil Cd contents on a Carixien soil series of a part of Burgundy (in French Bourgongne) in France. And the researchers compared this data on the Carixien soil series with the data on Dubloc (Domerien soil series), the result on Domerien soil has been already published. Findings: The pH value on Dubloc and that on Chaponne were very different. On Chaponne the pH changed in big range, while on Dubloc the value ranged little. The Chaponne soil extracted large amount of Cd up to 1440 minutes (24 hours), while the Dubloc soil did in smaller amounts. Novelty: The researchers take a hypothesis for this result.On Chaponne soil the ‘hole’ occurred with the rapid change of pH value, and then from the hole the Cd in the soil continued to be extracted, while there was not ‘hole’ in the Dubloc soil. But the real reason of ‘hole’ of the Chaponne soil is not explained until now.

© 2020 Bermond et al.This is an open-access article distributed under the terms of the Creative Commons Attribution License, which permits unrestricted use, distribution, and reproduction in any medium, provided the original author and source are credited. Published By Indian Society for Education and Environment (iSee).

Objectives: To solve the Multistage Distribution System Planning (MSDSP) problem by a solution strategy based on inve...

Objectives: To evaluate the alternatives of connection to the Metropolitan Area owned by the municipality of Chinchin...

Pilot Study on Inter-Professional Team Building - Teach Together an...

An Analysis of Cash Holdings of ICT firms

Objectives: The purpose of this paper is to investigate whether the levels of cash holdings and cash reserves of ICT ...

This paper deals with the idea of bipolar fuzzy soft sets applied to the ideal theory of Γ-semigroups. We have intro...

An Efficient User Preference and Page Relevance based Page Ranking ...

Objectives: The objective of this paper is to decide the startup and shut down status of thermal generating units to ...

Curve Number (CN) as Pressure Indicator of the Hydrological Conditi...

Objective: This research study analyzed hydrological surface behavior of the lower basin of the Cauca, San Jorge and ...

Objectives: The primary aim of this qualitative research was to describe the quarantine experiences of COVID-19 patie...