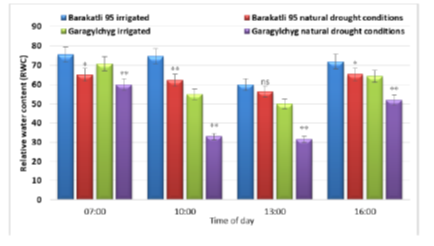 Objective: The activities of alanine and aspartate aminotransferases, NADmalate dehydrogenase in the ontogenesis have been determined in leaves of durum wheat genotypes (Barakatli 95, Garagylchyg 2) with contrasting drought tolerance, cultivated under natural soil drought conditions. Methods/ analysis: Enzymatic activities of aspartate and alanine transferases, NADmalate dehydrogenase were determined spectrophotometrically (Ultrospec 3300 pro, Amersham, USA). Measurements were taken at 340 nm for 1 min and the obtained results were expressed as mmol mg-1*protein min-1. The unequal variance two-tailed Student’s t-test was applied for the analysis of the significance of differences between plants cultivated under irrigated and natural drought conditions. P 0.05 was considered statistically significant. We used three samples for each treatment and performed the analysis twice. Findings : In flag leaves of the drought-tolerant Barakatli 95 genotype, the alanine aminotransferase activity increased ~2.7 and ~2.2 fold compared to the drought-sensitive Garagylchyg 2 genotype, under irrigated and natural drought conditions. According to the results, catabolism of amino acids is faster in the drought-sensitive Garagylchyg 2 genotype compared to the droughttolerant Barakatli 95 genotype under stress. Although the activity of all three enzymes studied varies in parallel in the ontogenesis of flag leaves, it is mostly dependent on leaf water content during the day. Novelty/improvement: The obtained data suggest that high enzyme activities in the Barakati 95 genotype play a role in achieving drought tolerance.

© 2021 Gurbanova et al. This is an open-access article distributed under the terms of the Creative Commons Attribution License, which permits unrestricted use, distribution, and reproduction in any medium, provided the original author and source are credited. Published By Indian Society for Education and Environment (iSee)

Analysis of the Media Engagement Attributes of Voters Gauge used in...

This study carried out a survey targeting sample of 609 audience panel voters of 15 regions including Seoul during th...

Effect of the Substitution of Pork Grease by PreEmulsion of Soy Iso...

Objective: The objective of this study was to analyze the effect of the substitution of pork dorsal fat by a pre-emul...

This paper proposes an efficient strategy for portfolio management named SPM with consideration of risk and required ...

Methodological Approach to Assessing Performance of the Organizatio...

Objectives: This article develops a methodological approach to assessing performance of the organization investment p...

Rice is the most important cereal on the globe, being the main source of energy and income for the majority of the wo...

Background/Objectives: The cases related to Brain Tumor has increased with respect to time owing to various reasons. ...