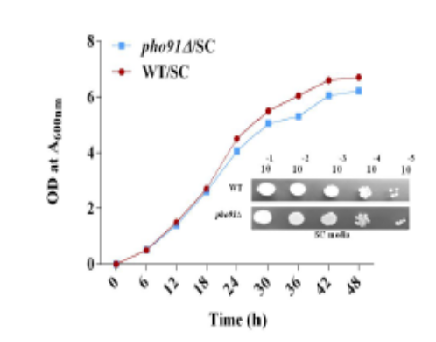 Objective: The current study tries to elucidate the impact of low-affinity Pi transporter Pho91 (using pho91Δ cells) on lipid metabolism and cellular organelles morphology (mitochondria and vacuole) in yeast Saccharomyces cerevisiae. Methods: The lipid profile was performed using thin layer chromatography (TLC), and the membrane defect was determined using DiOC6 staining, lipid droplets (LDs) were observed by Nile red staining, mitochondrial morphology was observed using aconitase 1 GFP, vacuolar morphology was studied by FM4-64 staining and were performed with the aid of laser scanning fluorescent microscope. Findings: Pho91 is a low-affinity phosphate (Pi) transporter in the vacuoles that functions under Pi-rich conditions, but its role in lipid metabolism is largely unknown. In this study, we used defined synthetic complete media (SC). The deletion of Pho91 depicted a moderate growth defect but increased the major phospholipids PC, PE, and PI. Alterations in the membrane phospholipids resulted in defective membrane morphology. In pho91 mutant (pho91Δ), the neutral lipids TAG and SE were increased and stored as LDs. The LD numbers were increased in pho91Δ cells than in WT cells. Altered phospholipids also defective mitochondrial morphology and enlarged vacuoles in pho91 deletion. Novelty: In the absence of low-affinity Pi transporter pho91, it increases phospholipid, neutral lipid levels, LD numbers, and impacted mitochondria along with vacuolar structures.

© 2022 Mani & Nachiappan. This is an open-access article distributed under the terms of the Creative Commons Attribution License, which permits unrestricted use, distribution, and reproduction in any medium, provided the original author and source are credited. Published By Indian Society for Education and Environment (iSee)

Genetic Analysis of F1 Hybrids Derived from Aromatic (Exotic) × A...

The aim of this study was basically to develop new aromatic rice lines through integrated breeding approaches. After ...

During the last fourteen years, Afghan media has played a significant role in empowering women and they still do. Med...

Football as a part of the Process of Development of Competence of P...

Background/Objectives: Modern open educational space of the high school implies the system of the educational process...

The Effect of Musical Activities Program on Parenting Stress and De...

Background/Objectives: This study aims to identify the effect of musical-activities-program on parenting stress and d...

This paper, presents on the coordination of power system expansion planning including sustainable generation expansio...

Effectiveness of Seismic Retrofit for Existing Concrete Buildings u...

In the present study, the effectiveness of the various retrofit methods for concrete structures are investigated and ...

Objectives: We have developed an Offline Navigation Android1 application especially for the visually impaired people,...