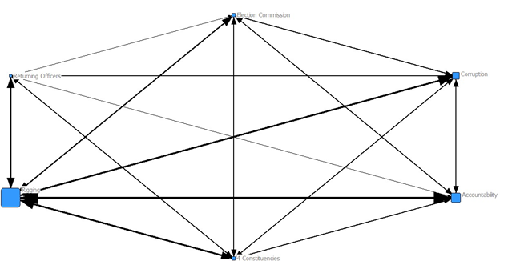 Objectives: To explore the relationship of Pakistani Political Leader Imran Khan Speeches and newspapers agenda examining the coverage of electoral rigging issue which gained the momentum of a movement in Pakistan during post elections 2013 against the then siting government of Pakistan Muslim League Nawaz's (PML-N). Method: The study takes its roots from the network agenda setting model. It aims to study the model in the context of agenda building in Pakistan. Social Network Analysis technique was used to analyze the data collected from two sources including: Live speeches of movement leader, Imran Khan and coverage of three leading Urdu dailies of Pakistan; Express, Dunya and Jang to explore the relationship among these agenda setting networks. Firstly, we performed content analysis of 128 speeches of Imran Khan, 964 news stories and 239 editorials of sample newspapers. Secondly, we turned data into matrices and applied network analysis techniques with the help of UCINet and NetDraw software. Findings: QAP Correlation indicates strong association among, Imran Khan Speeches and newspapers agenda. However, these associations are different for two issues; Electoral rigging, and PML-N rigging. Imran Khan influenced the media agenda more for shaping the image of elections-2013 as unfair and rigged. On the other hand, his speeches were found less influential in shaping media agenda about the involvement of PML-N in electoral rigging. In this way, study reveals that third level agenda building effects depend upon the political nature of issues.

© 2020 Saeed, Bilal, Raza. This is an open-access article distributed under the terms of the Creative Commons Attribution License, which permits unrestricted use, distribution, and reproduction in any medium, provided the original author and source are credited.
Published By Indian Society for Education and Environment (iSee)

Objectives: To calculate the energy performance of the Electric Propulsion System (EPS) using the mathematical simula...

Objective: C4.5 data mining algorithm was scaling up using L’ hospital rule by removing all the logarithms and ...

Objectives: To analyze the characteristic properties of certain food products, their microstructure is designed throu...

Background/objectives: With the advent of Internet of Things (IoT), Government has taken a huge step in the field of ...

Prediction of Surface Roughness Based on Machining Condition and To...

Influence of Door Opening and Collar Stiffener on the Buckling Capa...

This study analyzes the buckling capacity of steel cylindrical shells that exhibit the lower segment of 2MW, 3MW and ...

Analyzing the Effects of Coding Education through Pair Programming ...

The lean manufacturing is a systematic method for waste minimization. Lean techniques are applied in automobile servi...