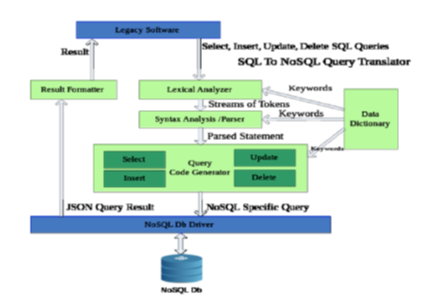 A Middleware Model for SQL to NoSQL Query Translation

Objectives: To propose a suitable model for RDBMS SQL to NoSQL query translation, which works as a middleware between legacy applications and the NoSQL database. This model is expected to translate the SQL queries into NoSQL queries, and forward them to the NoSQL database for execution, and after the execution, the result received from NoSQL should be transferred to the legacy application. Methods: The proposed model is implemented in Java programming language for MySQL (RDBMS) to MongoDB document database query translation. The prototype translates the insert, update, delete, and select SQL queries into equivalent NoSQL query format for MongoDB document database. The middleware transforms the SQL queries to NoSQL query format, and returns the result to the legacy application, which they are expecting from the database. Performance of our model has been evaluated by executing SQL queries such as select, insert, update, delete (with simple and join queries) in Studio 3T, UnityJDBC driver for MongoDB, and our model SQLNo- QT. Findings: The study shows that the proposed model SQL to NoSQL Query Translation Model (SQL-No-QT) performs better in some cases. This model takes 7.5% less time compared to Studio3T, and 38.19% less time compared to UnityJDBC driver in executing select queries, and 78.82% less time compared to Studio3T in executing delete queries in big size database. This model also can execute the join SQL queries for insert, update and delete, which are not available in UnityJDBC driver for MongoDB. Novelty: This model works as a middleware between a legacy application and a NoSQL database, and it removes the need of developing whole new software for legacy application.

© 2022 Namdeo & Suman. This is an open-access article distributed under the terms of the Creative Commons Attribution License, which permits unrestricted use, distribution, and reproduction in any medium, provided the original author and source are credited.

Financial Mechanism for Investing in the Projects of Transport Infr...

Objectives: This article is devoted to the actual problem of the economy of any state – finding effective forma...

The Relevance of Between the Stability on the Financial Structure a...

The purpose of the study is to investigate that the relevance of between the stability on financial structure and the...

The Study on Revelation of Glaucoma using Structural Features

Objectives: To find the presence of glaucoma disease in eyes. It has to be found at the earlier stages; otherwise it ...

Objective: To design and implement a Zigbee Imaging system to track and detect the multi colored moving objects using...

Environmental impacts of drilling mud and cutting wastes from the I...

The environmental impact of exploratory wastes (drilling muds & cuttings) generated during the drilling of Igbokoda X...

Evaluation of Groundwater Quality of Low Landfills in Sanandaj, Ira...

Landfills pose major bioenvironmental problems and difficulties. One of the most major problems of such a nature is r...

Computational Analysis on Performance of Heat Sink with Different C...

Objectives: The aim of present work is to find out the thermal performance of solid and perforated heat sink with var... 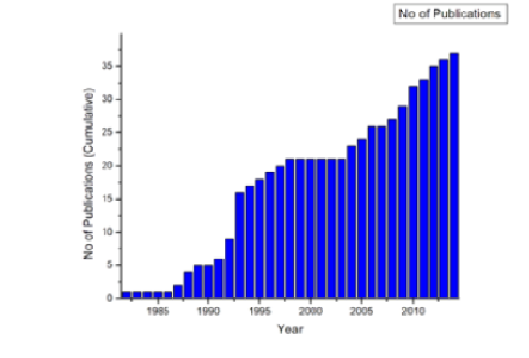 On the vector plasma drift measurements over Equatorial Ionosphere ...

Image enhancement is one of the major research areas in the field of digital image processing. The sole objective of ...